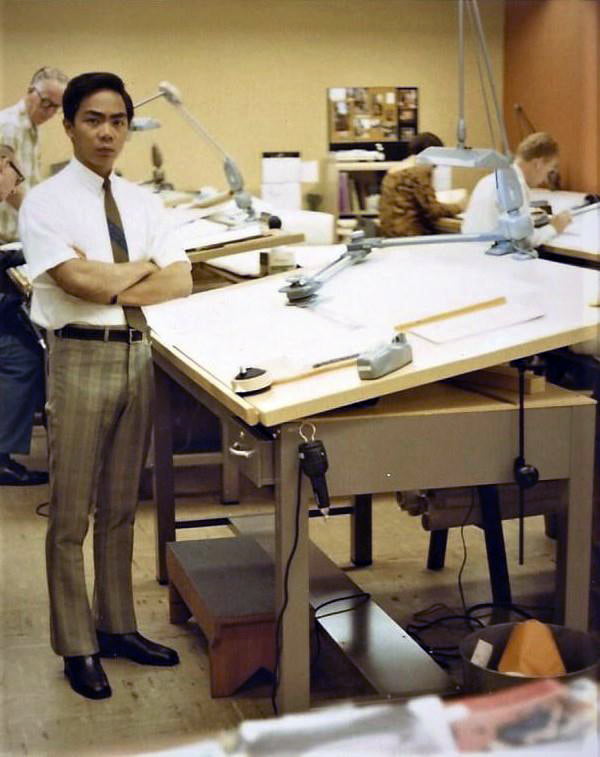 Drafting “As Builts” at Disneyland

Ben Colcol got his start at Disneyland as a Senior Civil Engineer Draftsman in 1969. One of the first projects he was tasked with had to do with photography.

“Kodak left Disneyland as a sponsor, and GAF took over, so I had to reestablish the “Scenic Shot” locations throughout the park,” he said.

During that time, he was also a Structural Inspection Coordinator. As such, he helped out with inspection of a variety of park attractions.

This included the Monorail Beams, the concrete foundations for the Submarines, the Matterhorn, all the buildings on Main Street U.S.A. and Sleeping Beauty Castle.

Wandering around the park with a surveyor to accurately measure all the locations, Ben would always take a camera with him. This included a few fun photos of the Jungle Cruise

His drafting skills were used in a unique documentation effort.

“It was interesting to deal with the park’s history. I had to convert many of the original Architectural and Civil plans from 1955 into ‘As Built Plans.’ This meant doing a survey of all the underground utilities locations too,” he said.

Though the Haunted Mansion was fairly new, there was a water leak inside the elevator. He and a team used food dye to trace the leak so it could be sealed.

During late 1970 and 1971, the park created a model of Disneyland so he and others could evaluate and redesign the many berms that separated the different lands and provide visual separation between the lands.

Ben found the work to be challenging, but he and others found ways to have some fun too such as being part of a Canoe Race team.

Ben and others in his area frequently pulled pranks on each other such as gluing others drafting equipment to the table, placing fake ink and coffee spills and changing a person’s stool height. Another unique one was sticking a whistle into a fellow Cast Member’s car’s exhaust pipe.

“In late 1971, I was transferred to Disney’s ‘Buena Vista Construction Company’ as a Construction Plans Assistant Manager, and was put on the Bear Country project.”

This meant that design components would be developed at the same time as the overall design process, including the architectural plans allowing construction in the field to commence much quicker than the regular traditional methods.

“For the project we used the PERT (Program and Review Technique” to examine the various tasks in a schedule and determine a CPM (Critical Path Method) for each element.”

By analyzing each element, and the other tasks dependent on it, they were able to reduce the time and cost to complete the project.

“Bear Country Jamboree was complete within two years as opposed to four or five years and was under budget. My role was to insure that as plans and specifications became available, they were distributed to the various trades that needed them.

That fast pace of design and construction also meant that design modifications were constant; the mantra being, ‘just because it was on paper does not necessarily mean it can be built that way.’ Ad-libbing (arm waving in Imagineering terms) in the field was the norm to make things work.”

All that “on hands” field experience at Disneyland helped Ben out when he left in 1972 to join the U.S. Army Corps of Engineers as an Engineer Officer.

“After 31 years, I retired as a Colonel, and was Deputy Assistant Commandant of the U.S. Army Engineer School at Fort Leonard Wood.”

Do you have a story to tell? We love telling stories, and particularly ones from you. It could be of your time as a Cast Member – what you did, your experiences and even some fun anecdotal things. Of course, we want photos with the stories. Email: editor@disneylandalumni.org.